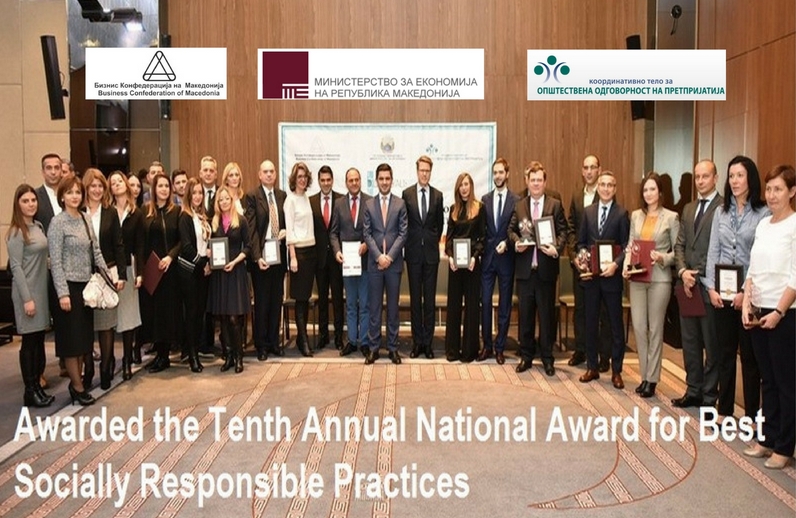 Business Confederation of Macedonia, The Ministry of Economy and the Coordinative Body for Social Responsibility (CBSR) today hosted the 10th jubilee traditional annual event – the National Award for best socially responsible practices of enterprises in Macedonia, realized during the last year. This year, on the occasion of the jubilee, in addition to the established awards, were also awarded jubilee ones as a special recognition for the enterprises that in the period 2007-2017 have won the most awards, in the form of statuettes and plaques.

At the ceremony, the Prime Minister of the Government of the Republic of Macedonia, Zoran Zaev, addressed the audience, reminding that the aim of the award is to promote positive practices of socially responsible action and to inspire the introduction and promotion of social responsibility in our country, he also stated: “The Republic of Macedonia together with other countries, is committed to the implementation of the Sustainable Development Goals that are closely related to corporate social responsibility. There is no legal obligation for this. There is a civilization, humane, human commitment, which is much stronger than the legal one. The essence of the Sustainable Development Goals is elegantly captured in a single sentence: ‘No one should be left out’. This is our guiding principle in everything we do. We are glad that the Government’s reform program is based on the same principle”

Welcoming the jubilee and this year’s rewarded and congratulating creativity, consistency and wisdom to work according to European standards when the social responsibility is in question, Minister Bekteshi, as host of the event, said: “Only with enterprises that with their transparent and ethical behavior show that their goal is not only to generate profit, but also to preserve the environment and promote the social milieu, thus contributing to sustainable development and prosperity in the community in which they live and work, We can say that we have succeeded in developing a concept of corporate social responsibility, and making our country a better place for all of us.”

The Minister of Labor and Social Policy Mila Carovska emphasized the social dialogue between institutions and companies in every segment of the planning, implementation and realization of the policies, regulation and budget of the state, but also urged the companies to join as many as possible socially responsible projects in the area of social protection.

According to EU Ambassador Samuel Zbogar, in conditions of market economy, it is quite logical for companies to strive for profit, but in order to achieve sustainable development, it is necessary to take into account the conditions in the environment in which they operate.
“EU supports the introduction of the concept of CSR in the Republic of Macedonia from 2007 to date, and this concept is a component of the Strategy 2020, in the part of smart, sustainable and inclusive growth”, emphasized Zbogar.

The President of CBSR, Aleksandar Nikolov, recalling the initial idea of introducing the award 10 years ago, expressed his satisfaction that the companies recognized the economic and social potential of socially responsible projects.
The Executive Chairman of the Business Confederation, as a project partner from Macedonia, Mile Boskov, underlined that the concept of social responsibility is an opportunity to exploit the potentials in the best possible way, and through harmonized measures and policies to achieve the economic growth of the country.

34 projects were submitted at the competition of this year’s award, from 25 enterprises, out of which 10 small and medium enterprises, which applied with 10 projects, and 15 large enterprises submitted 24 projects on the competition. Thus, this year, for the first time, 8 companies applied, i.e. 32% of the total number which indicates that the interest of the companies for participation in the award from year to year is increasing. In addition to the standard categories, the attitude towards the employees, ethical management, market relations, environmental attitudes and community investments, this year, for the third time, was recognized as the most inventive practice.

Socially responsible projects of Adora Engineering (With eco homes for 15 years we are building green cities in Macedonia), Alkaloid (Implementation of talent management system in Alkaloid), Engeneering Institute Macedonia (GIM- most ecologic company), EVN Macedonia (Exhibition Center Matka) OKTA (I am cautious), Rade Koncar – TEP (Holignosis), Ramstore Macedonia (ISO 22000: 2005), Skopski Leguri (From Waste to Product) and Farmachem (Together we create a better world) this year they won the National Award for Best Social Responsibility practices of the enterprises in Macedonia in 2017 in the form of statues in five different categories.

Plaques, in turn, received the projects of One. Vip (Collective Agreement of One.Vip), Ramstore (The Shop is ours), Dauti Komerc (Equal opportunities for all), Orka Holding (Our employees – the most important resource of the company), PU Center for early children development Bonbons, Bitola (In ‘Bonbons’ grow responsible, educated and empathetic children), EVN Macedonia (Energy Efficiency Platform – Energy Generation – New Generation, as well as, To Protect the Nature from the Dangerous Waste), Ohridska Banka (Insurance of Denars transaction account and insurance of of Denars deposit), Pakomak (Green Planet), Faculty of Art and Design at EURM (Nature is calling us), Sparkasse Bank (Humanitarian Action for Flooded Areas), ITD Distribution (Computer room), Stopanska Bank Skopje (Dreaming, changing) and Adora Engineering (New home for the careless old age of Trajkovs in Dedino).
The recognition for the most inventive practice was won by the company Skopski Leguri, with the project “From waste to product.”

In the past 10 years, a total of 173 Macedonian companies reported 540 good socially responsible practices, of which 252 were best practices from five different areas of social responsibility, of which 101 with statuettes, and 151 with plaques.
Winners of the jubilee awards for the most awarded companies in the group of small and medium-sized enterprises are: Rade Koncar-TEP, Farmahem, Donia Prilep, Pakomak, Duna Computers and Rade Koncar-SERVICE, while among the large enterprises with the most awarded awards for the best socially responsible practices in the past 10 years are: EVN Macedonia, Cementarnica USJE, Feni Industries Kavadarci, Adora Engineering and Alkaloid. 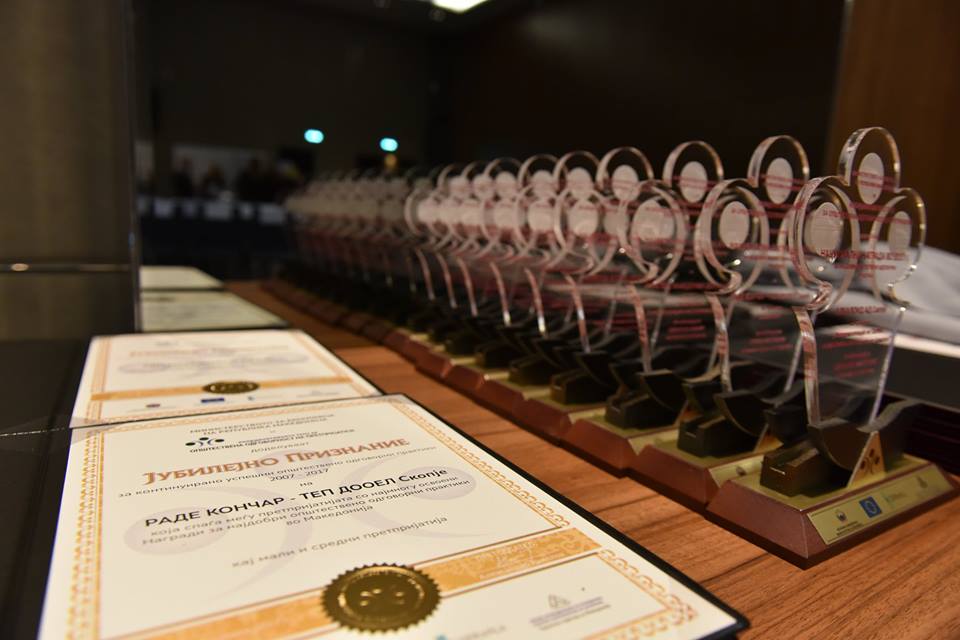 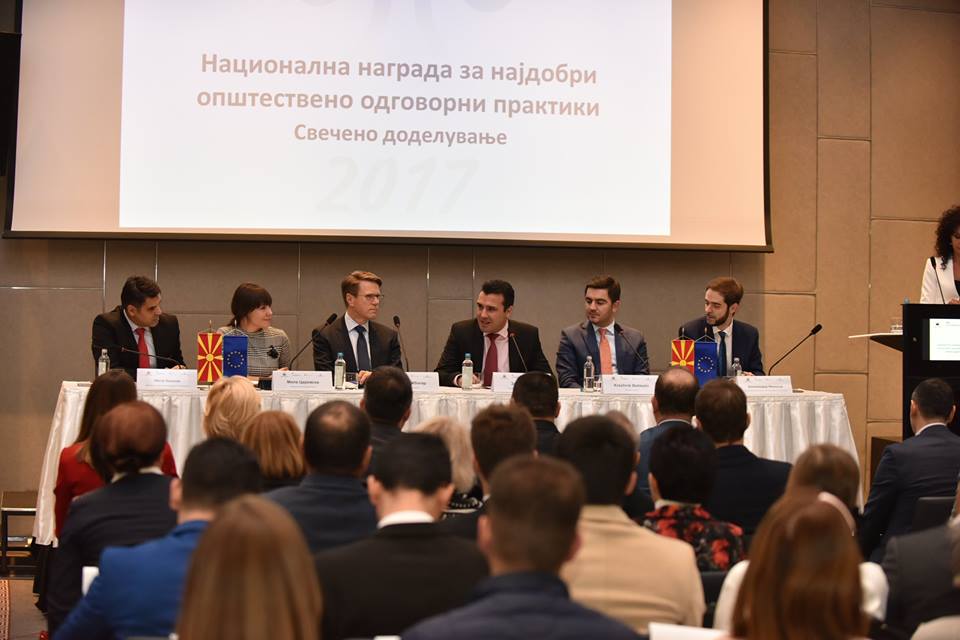 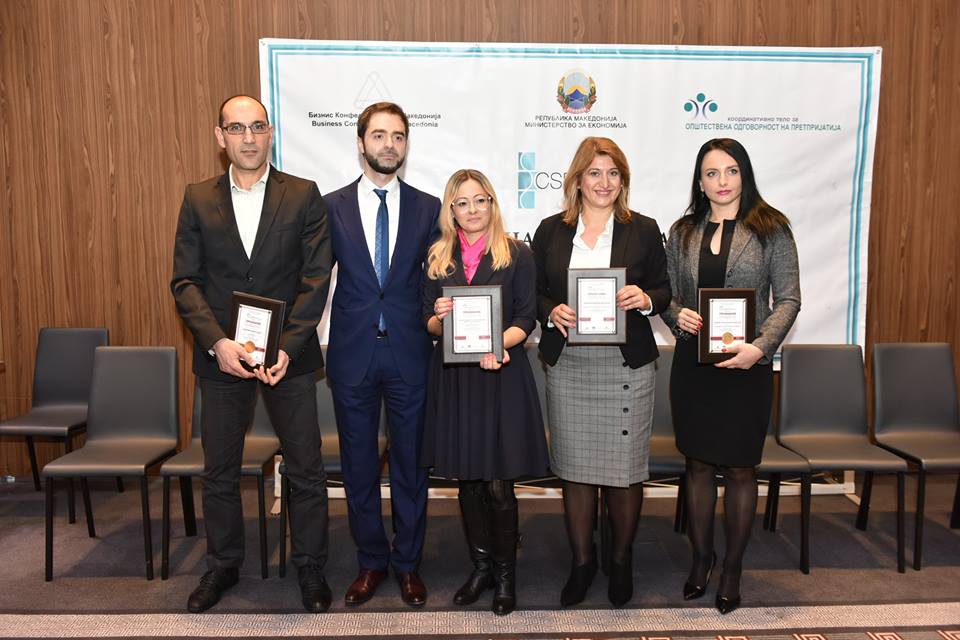 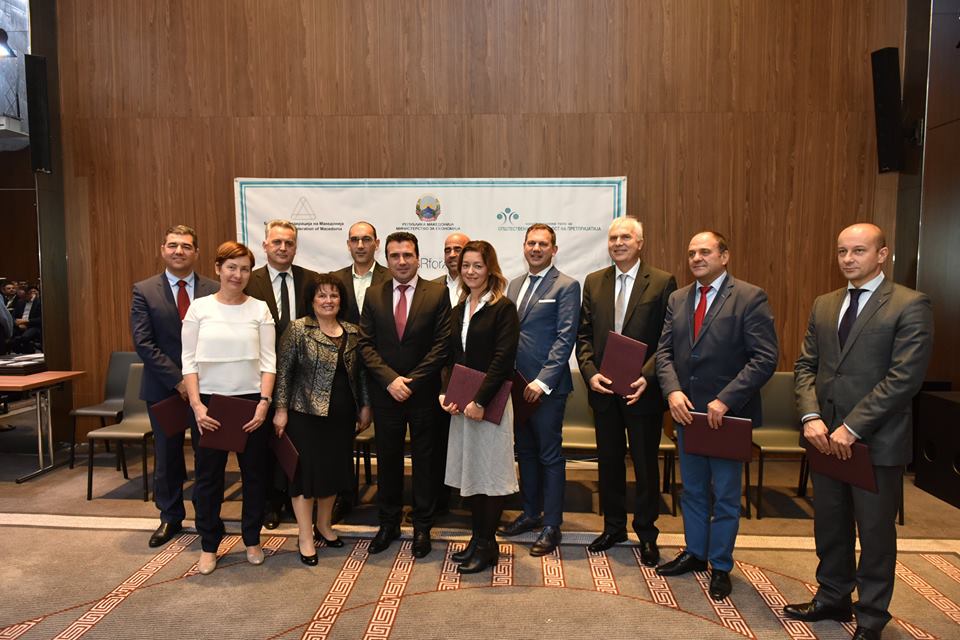 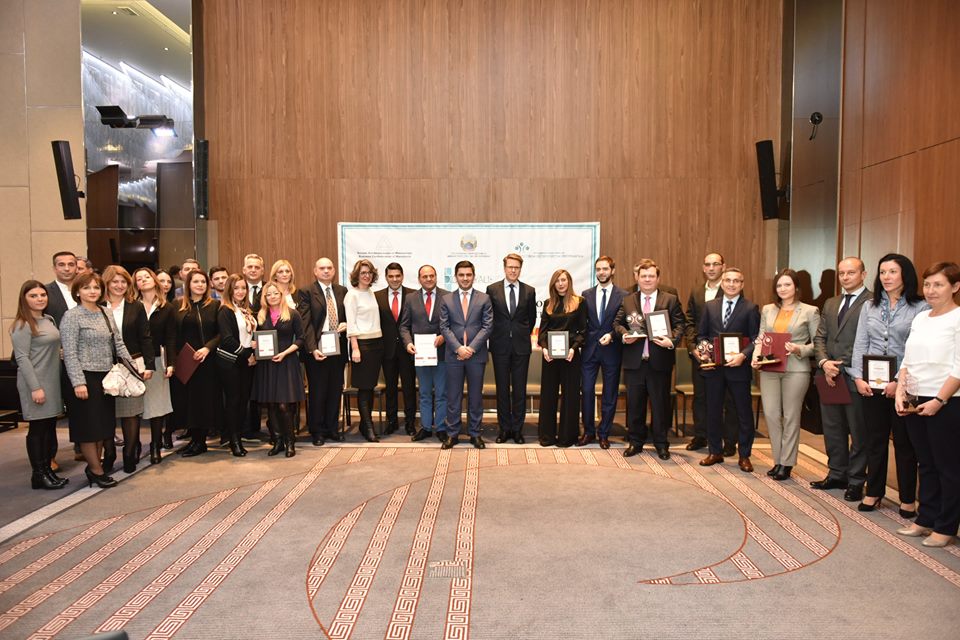